In September 1954, Jim enrolled in the University of Maryland, studying graphic design. His high school, Northwestern, was around the corner, and his parents’ house in Hyattsville where he continued to live until he married in 1959 was also nearby. Jim met his wife Jane Nebel in a puppetry class there his first semester and got involved in the theater and art departments. Even though he started performing on local television at the same time and had his own show by the following spring, Jim continued to take classes at the University until his graduation in 1960.

Jim left Washington in 1963, but his ties to Maryland remained strong. In 1978, his alma mater presented him with an Honorary Doctor of Fine Arts degree. The following year, he was given the Distinguished Alumnus Award of Distinction and served as the Grand Marshall at the University’s Homecoming parade. Jim juggled his schedule that week to be there, flying in from London for the weekend festivities. He invited family and friends to the parade and organized a party at his hotel. He then headed off to Los Angeles, but Jim continued to support the University over the years as a member of their foundation board and having Kermit serve as a spokesfrog in PSAs. The University returned the favor in numerous ways including the 2003 dedication of a prominent statue of Jim and Kermit in front of the Student Union building. 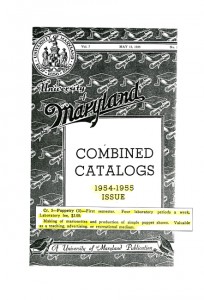 University of Maryland course listing for the Puppetry class that Jim Henson took in the fall of 1954. 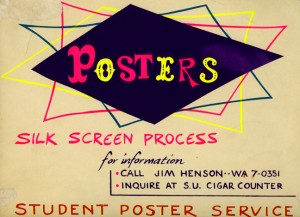 Advertisement for Jim Henson’s silk screen poster business based at the University of Maryland Student Union.