While many families’ Thanksgiving traditions involve traveling home to Grandma’s house, home-cooked turkey with all the trimmings, and viewing a football game or two, the Henson family often enjoyed Thanksgiving from the top of a float at the Macy’s Thanksgiving Day Parade. The November 11th, 1974 Parade marked the first appearance at the Macy’s Thanksgiving Day Parade by any of Jim Henson’s characters. As Sesame Street was well into its fifth season by this point, the residents of Sesame Street would have been well-recognized to the parade-viewing audience. Big Bird, Bert and Ernie, and the rest of the gang paraded down Broadway with floats featuring such treasured and well-known characters as Snoopy, Peter Pan and Wendy, Mickey, Minnie, and Pluto, as well as Alice and her friends from Wonderland, and Snow White and the Seven Dwarfs. In the years to come, many subsequent floats and large balloons of Jim’s creations, including Muppets, Fraggles, and Sesame Street characters, would appear in the parade. In 1978 Jim Henson earned a Rollie Award (named for Roland H. Macy) for his continued contributions to the Macy’s Thanksgiving Day Parade, which can still be seen today.

To learn more about the Muppets’ many appearances in the Macy’s Parade and others, read the entry for November 22, 1977. 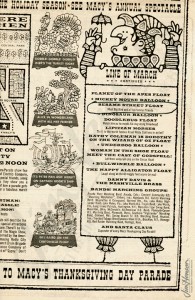 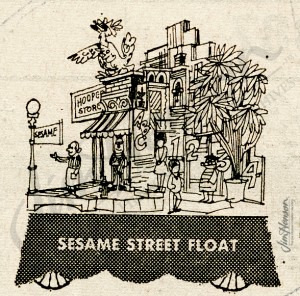 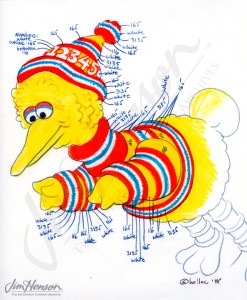