The discussion of toilet paper on television in the 1960s was handled with great discretion. Commercials for that very necessary product rarely mentioned the bathroom and relied heavily on the imaginations of the audience to make the connection between a product’s softness and its actual use.  When Jim was approached by the Chicago agency Young and Rubicam about these commercials, it was the perfect opportunity to do something a little more abstract and experimental. A departure from the comic hard-sell typical of Jim’s earlier commercials was what was in order here.

Instead of a big-eyed character with a sharp tongue, the Aurora commercials featured a gloved hand, with coy eyelashes and a fur collar on the wrist. Frank Oz was recruited to perform the lithe hand in the test commercial made in 1965. The client, Northern Products, a division of The American Can Company, was clearly pleased and ordered the production of the actual advertisements. Along with the televised pieces, they used images of the gloved hand in print ads and featured it in Television Age magazine. The following year, when Young and Rubicam ordered additional commercials, Jim took his six-year-old daughter Lisa along to participate in the shoot. 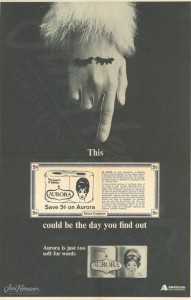 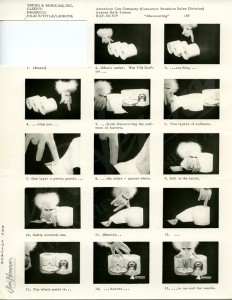 Storyboard for Aurora Bath Tissue made from photographic stills from the commercial, 1966.

This entry was posted in 11-November '66, 1966, Commercials and tagged Lisa, Oz, Rubicam, Young. Bookmark the permalink.