On Thanksgiving in 1971, overfed and football-satiated Americans digested their dinners while watching Jim Henson show off practically everything in his repertoire on The Dick Cavett Show. A perfect family-friendly way to end the holiday, audiences tuned in at 11:30 PM in great numbers: the Nielsen ratings were up from the 12 share that Cavett usually got to an impressive 18 share. Jim and his team, Frank Oz, Jerry Nelson, Caroll Spinney, Don Sahlin and Kermit Love filled the entire ninety minutes with songs, demonstrations, short films, and previews, all introduced by host Dick Cavett.

Jim started with the very first piece he had done on late-night television back in 1956, Kermit lip-synching to “I’ve Grown Accustomed to Your Face”. What followed showcased the breadth of Jim’s craft and expanse of his imagination (and his lawyer’s agility in arranging clearances). Moments from The Frog Prince segued into the classic Muppet piece, Mahna Mahna.  Sesame Street characters sang songs from their latest Grammy-winning record The Muppet Alphabet Album and bantered with Cavett. Jim showed clips from his innovative experimental work including Time Piece and Youth ’68 and his short animated counting films. With Kermit Love, he demonstrated Bossman, the oversized character designed for the live stage, and with Don Sahlin, he showed the changing faces of his Southern Colonel puppet. Though Rowlf’s monologue was cut due to time constraints, Jim managed to show the audiences the full range of his work. This “live-to-tape” show (it aired as it was being taped) was repeated November 17, 1972. 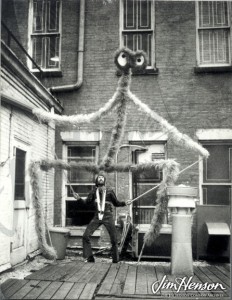 Jim demonstrating the Bossman puppet on the roof of his NY office. 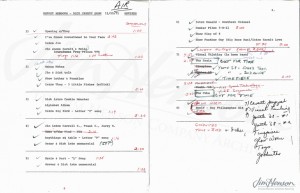 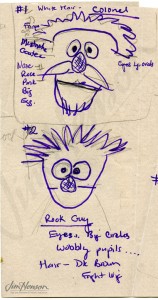