During the first season filming The Muppet Show it proved difficult to convince celebrities to appear as guest stars. Although the variety show, vaudeville-esque format was familiar, starring as the only human on an all-puppet show was not. So when Broadway great Ethel Merman agreed to guest star on the 22nd episode of The Muppet Show, it was an exciting moment for everyone involved to have a “very special guest star” of this magnitude perform with the Muppets.

Born in 1908 as Ethel Agnes Zimmerman, Ethel Merman was a star of the stage, screen, and television. Known for her belting singing voice, she made her Broadway debut in the 1930 show Girl Crazy. Her many roles on stage included starring in Anything Goes (1934), Annie Get Your Gun (1946), Gypsy (1959), and Hello Dolly (1970). She appeared in many feature film musicals including Irving Berlin’s Call Me Madam (1953) and There’s No Business Like Show Business (1954) with Donald O’Connor and Marilyn Monroe. As a television performer, Merman occasionally appeared in sit-coms like That Girl and The Lucy Show, but she mainly reprised the songs she made famous on Broadway. She sang on a number of variety shows and specials, including The Dean Martin Show, The Judy Garland Show, and The Ed Sullivan Show.

Much like her appearances on other variety shows, as a guest star on The Muppet Show Merman performed Broadway hits. Filmed from November 16th through November 18th, 1976, some of the songs Ethel Merman performed included Irving Berlin’s “There’s No Business Like Show Business,” a medley that included Cole Porter’s “You’re the Top,” “Friendship,” and “It’s De-Lovely,” and several other Irving Berlin tunes. Singing alongside Kermit, Miss Piggy, Fozzie, and Uncle Deadly, with plenty of feedback from Statler and Waldorf, Merman’s guest appearance helped promote the show into season 2.

Ethel Merman’s appearance on The Muppet Show aired in New York on February 21st, 1977. Following her Muppet Show appearance, Ethel Merman performed in A Special Sesame Street Christmas in 1978. Additionally, archival footage of her singing “There’s No Business Like Show Business” from The Muppet Show was featured on the Muppets 30th anniversary special, The Muppets: A Celebration of 30 Years. It was a testament to her stardom and how important her appearance was to Jim Henson and the rest of the Muppet team that she was featured on this special, chosen from among the myriad of performers who worked with the Muppets during their first 30 years. 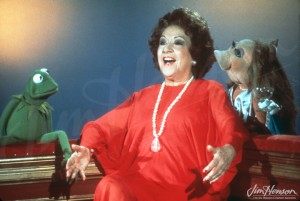 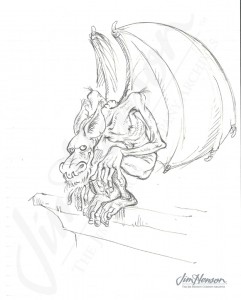 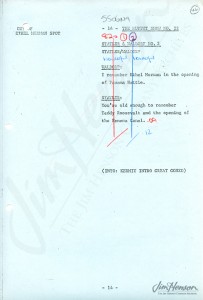