As a further extension of the Sesame Street brand and another way to reach children with educational and creative messages, Sesame Place was first conceived in 1979. The original incarnation of this play park (differentiating itself from a theme park) opened on July 29, 1980 outside Philadelphia. Seen as a “three-dimensional extension of the learning-and-fun concept pioneered by the Children’s Television Workshop,” Sesame Place was designed to blend education with entertainment.

Dubbed “a 21st Century Playground”, Sesame Place opened with an outdoor play space designed to develop skills and coordination using “kid power”. Visitors rode zip lines, traveled on an elevated bicycle-powered ride, maneuvered through a forest of 40 oversized lightweight punching bags, pumped water and watched it tumble through a series of water wheels, bounced on a Rubber Duckie “pond”, and climbed a slippery cookie mountain. Indoors, a Computer Gallery intrigued children with its, “…striking collection of original and exclusive electronic games.” Long before video games became omnipresent as they are in our world, this would have been a spell-binding attraction. The Sesame Studios area of the park used optical tricks and voice manipulation technology to allow children to play with sight and sound. A healthy meal or snack was a learning tool, too, with the Food Factory’s transparent kitchens providing a sort of theater in the round. And, of course, Sesame toys, books and other products were available in the gift shop.

Sesame Place has evolved and changed over the years. At the beginning, there were no costumed characters roaming the park and it was difficult to keep the computer gallery up to date. While first time visitors were plenty, it was difficult getting repeat customers. Eventually, the menu at the restaurant changed from whole wheat pizza and zucchini cookies to chicken fingers and fries, and by 1983, oversized characters greeted visitors to the park. Within a few years, water amusements went in along with mechanical rides. Sesame Workshop continues to make sure the park maintains their high standards for child-appropriate entertainment that is also educational, helping design attractions like their popular presentation on fire safety.

The Sesame Place that Jim mentioned in his journal opened in Irving, Texas in 1982. It did not get the necessary crowds due to many competing water parks in the area and closed two years later. Additional parks opened in Japan (closing after about fifteen years) and in Mexico (Plaza Sesamo). Sesame Place in Pennsylvania continues to be a popular destination for families and fans of Sesame Street. 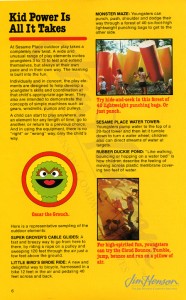 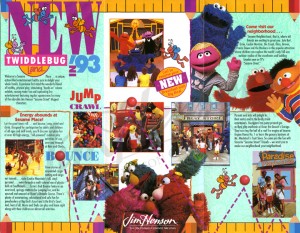