While Jim was integral to the development of Fraggle Rock (having had an idea for a similar show as early as 1964), he did not perform in every episode. Busy with feature film work, developing other television shows, and performing on Sesame Street, Jim let his creative team manage the show, and his core performers Jerry Nelson, Dave Goelz, Steve Whitmire, Karen Prell, Kathy Mullen, and Richard Hunt portrayed the main characters. Jim traveled to the studio in Toronto during each season to direct some episodes or to perform a couple of choice characters. On October 28, 1985, Jim would have been performing Cantus in the season four episode “Junior Faces the Music”.

Jim’s Fraggle characters embodied important aspects of his personality and mirrored his role in his company. His over-the-top evangelist-like character Convincing John could talk anyone into doing or believing anything.  By harnessing the exuberance of some of his earlier advertising characters like the La Choy dragon or the enthusiastic executive in sales meetings films, Jim imbued Convincing John with his contagious optimism and ability to convince his team that anything was possible. The gentle leadership and guidance offered by his other Fraggle character, the minstrel Cantus, reflected Jim’s ability to help his staff find solutions within themselves without specific instructions. Jim’s suggestion to, “…perhaps try something else” is reflected in Cantus’s advice, “Go find your song.” 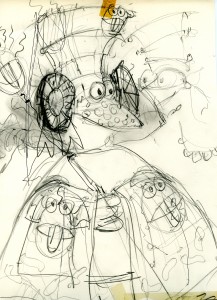 Jim Henson’s design for Convincing John dressed as the Grand Poobah for “The Secret Society of Poohbahs” episode. 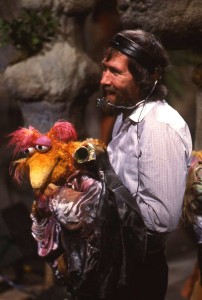 Jim and Cantus on the set on Fraggle Rock.