The last quarter of 1965 brought great activity to the Henson team. Along with The Jimmy Dean Show and Tonight Show appearances, Jim continued to make inventive commercials and sales films, and fielded inquiries about his short film Time Piece, landing a distribution deal. He was collaborating with Jon Stone and Joe Raposo for the first time on their television pilot, Cinderella, opening up a world of creative possibilities. And experimentation on film continued with Jim creating the elements for a short animated piece, Alexander the Grape.

Jim’s creative activities spilled over at home, too, where he and his wife Jane had four small children. Their Connecticut home pulsed with the energy emanating from a new puppy, cats, and Lisa (5 ½), Cheryl (4), Brian (2) and infant John. Family art projects were the norm, and Jim painted large oil canvases depicting the colored light that filtered through their wooded yard. One personal project inspired by his family and their forested surroundings was a short film, Run Run. Trying to integrate movement, music and light, Jim and his colleague Frank Oz filmed the Hensons’ young daughters joyfully running through the woods behind their house. The changing colors, shadowed and lit by the sunlight, move to the musical score, a gentle piece composed by Joe Raposo, and the girls travel among the trees and out into a clearing. Their mother, wearing a red dress reflective of the autumn leaves, meets them and leads them home.

While Jim did not use Run Run commercially, it gave him some experience meshing filmed images with music tracks to evoke an emotional response. Over the next few years, he would continue to experiment in that vein, filming images to match with music for presentations in his Cyclia night club project.

Learn more about the Henson’s time in Greenwich, CT.

Jim’s large oil painting of the light and shadow in a stand of trees, 1960s. 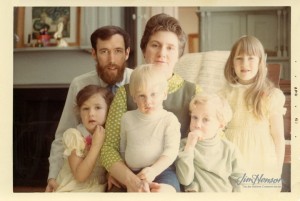