Jim’s thirteen-episode anthology series, The Jim Henson Hour, produced for NBC to air in 1989, gave him the opportunity to try out all the different ideas percolating in his (and his colleagues’) imagination. The first half of the show featured the Muppets (both old and new) behind the scenes of a television channel jumping between programming. This provided a place for Muppet Show style comedy bits and musical numbers, usually centering on a particular theme, and interaction with a guest star. The second half hour was wide open. Jim presented episodes of his Storyteller series, one-off programs produced previously for British television, and a range of new productions ranging from Miss Piggy’s Hollywood to the ecology-themed tale, Song of the Cloud Forest. The show that Jim filmed in the charming Nova Scotia village of Peggy’s Cove, Lighthouse Island, fell into the last category.

The origins of Lighthouse Island go back to 1971. Jerry Juhl, who had come east to work with Jim in 1961, had moved back to California, but he was continuing to actively work with Jim, providing Muppet scripts and other written material. They were in the midst of producing The Frog Prince and Muppet Musicians of Bremen specials together with Robert Lawrence Productions in Toronto, and at the same time, Jerry was working on non-Muppet projects. Collaborating with John Ross at Robert Lawrence, Jerry was developing an idea for a television series called Lighthouse Island. He wrote up the concept, and he and Ross presented it to Jim in November 1971, suggesting that Jim could direct the pilot and the three parties could work out a co-production arrangement. The half-hour series was to take place in a magical village called Lands End, and the action for each episode would be introduced by an eccentric lighthouse keeper named Jason Potts. Much like Doc (or in the UK, the lighthouse keeper) of Fraggle Rock, or the Storyteller in Jim’s 1980s series, Potts would serve to introduce the audience to the places and denizens of the town, some of whom are alchemists, witches, shape-shifting sorcerers, and a couple of curious, trouble-prone children. Each week, the story would center on one or another of these intriguing characters or on a new person who appears just once. That way, according to Juhl’s description, “the show will have the audience appeal of a series with continuing characters, plus the freedom and variety of an anthology.”

Among the sample stories that Jerry presented, the first was about a young man who comes to Lands End to buy a present for his future bride whom he knows only though correspondence. He finds a pair of silver slippers for her but must make a deal with the local witch in order to make the acquisition. In the end, just as in the version of Lighthouse Island produced seventeen years later for The Jim Henson Hour, the bride turns out to be a mermaid. While Jerry’s idea was never produced as a series, clearly he and Jim felt it had some merit and took advantage of the opportunity to give it a try in 1988. The intention, going back to 1971, was (as Jerry wrote), “…simply an adventure in good, pure storytelling. There are few things more universally loved than a good story.” 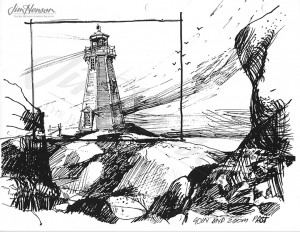 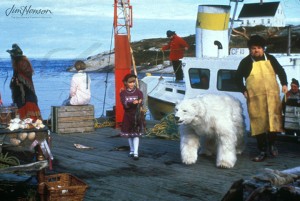 Some of the denizens of Lighthouse Island, 1988, including a polar bear played by Gordon Robertson. 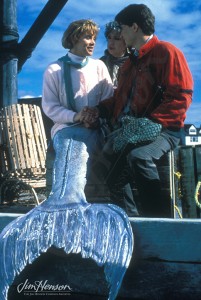