Following the success of Jim’s short film Time Piece, he and colleague Jerry Juhl began developing numerous ideas for experimental live-action films and television projects. In the fall of 1966, they sat down and wrote a detailed concept for a surrealistic comedy called The Cube which featured a man trapped in a white, plastic, doorless room and visited throughout the hour by a series of diverse guests. Unable to distinguish what is and isn’t, the man is confined by his own perception of reality. Jerry Juhl once explained, “We were in a period of time when that story seemed fairly common…about people trapped in situations and thinking they got out, and then discovering that they didn’t.”

Jim’s agent, Bernie Brillstein, sent the treatment to a producer at Bob Banner Associates whose work appeared on NBC. In his warm rejection note, the producer described Jim as, “one of the most brilliant creative artists of our time,” but that he saw, “no hope for it at any domestic network unless CBS Playhouse turns out to be far more courageous and experimental that I expect them to be.” As it happened, in 1967, the NBC television network began a series of one-hour Sunday afternoon programs under the heading NBC Experiment in Television, conceived as an opportunity to develop new television formats and concepts. In 1968, NBC bought The Cube and Jim produced it for the series to air the following February. The reviews were mixed but appreciative of the effort to explore philosophical questions on television, not standard fare for the medium either then or now.

Excerpts from “The Cube” on The Jim Henson Company’s You Tube Channel. 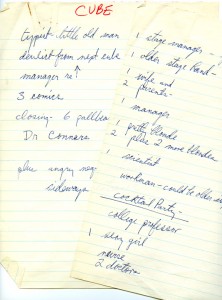 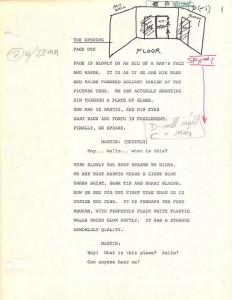 Page from Jim Henson’s directing script for The Cube with his annotations, 1968. 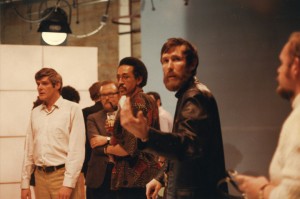 Jim Henson directing The Cube, 1969. A pipe-smoking Jerry Juhl is in the background.