Jim listed three different Tonight Show appearances in his journal during 1965, but unfortunately, footage seems to exist for only one (New Year’s Eve) and there is no other documentation of these appearances in the Henson archives. Kermit appeared with comedian Bill Cosby, who was promoting the first season of his ground-breaking series I Spy, marking the start of a long professional relationship between Jim and Cosby. The popular comedian was an ideal early guest on Sesame Street, appealing to both children and adults. In 1975, the Muppets encountered Cosby again on the Cher show. More than a decade later, Cosby celebrated twenty years of Sesame Street on Jim’s 1989 special, Sesame Street: 20 and Still Counting, and on January 11, 1990, the Muppets returned the favor, making a cameo on The Cosby Show episode “Cliff’s Nightmare.” 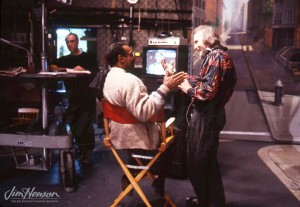 Bill Cosby and Jim behind the scenes of Sesame Street: 20 and Still Counting, 1989. 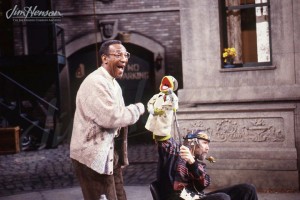 Bill Cosby reacts to Kermit (with Jim) on the set of Sesame Street: 20 and Still Counting, 1989. 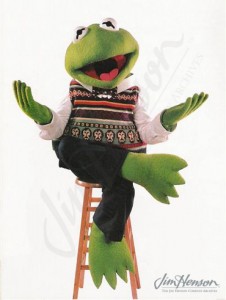 Bill Cosby’s taste in sweaters may have rubbed off on Kermit. The arena show version of Kermit wore this sweater vest with a Jim Henson pattern.