Throughout the 1950s and early 1960s, Jerry Lewis and Dean Martin, along with other celebrities, hosted telethons at various dates and places to raise money for and awareness of the Muscular Dystrophy Association.  In 1966, Jerry Lewis hosted his first MDA Labor Day Telethon at the Americana Hotel which was broadcast only in New York. Despite the limited audience, the telecast was so successful that Labor Day weekend was chosen for all future MDA telethons.

Around that time, Rowlf the Dog was coming off three years of appearances on The Jimmy Dean Show. The last show in the studio was taped March 25th, and Dean and his hound dog buddy spent the spring and summer touring the country and performing live. Rowlf was a national celebrity (there was even a toy version of him featured in holiday “wish books” that year) and an obvious choice to appear alongside Lewis. Clearly, his presence made a difference and viewers were drawn away from their holiday barbeques to watch Lewis and Rowlf and support the MDA.

More recently, in the 2000s, Jerry Lewis was joined on air by various other Henson characters. To help the MDA reach its goals, Kermit appeared as did Bear from The Big Blue House among others. And in a nod to the old pairing of Lewis and Martin, the Muppets Tonight! team of Johnny Fiama and Sal Minella appeared in both 2003 and 2005. 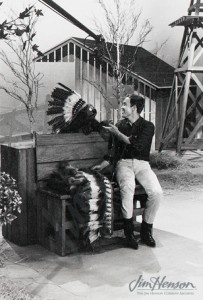 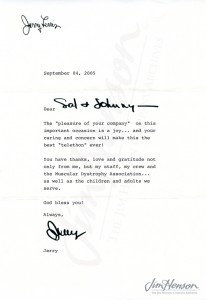 Jerry Lewis’s thank-you note to Johnny Fiama and Sal Minella for participating in the 2005 MDA telethon.