For each of its first three seasons, the producers of Sesame Street won the Emmy award for Best Children’s Series. The show’s success was due, no doubt, in large part to the tremendous appeal of its fuzzy stars, The Muppets. For season four (1973/74), the Muppets themselves were also nominated and won for Outstanding Individual Achievement in Children’s Programming. Besides the local Emmy award that he won back in 1959 for Sam and Friends, this was the first Emmy Award for Jim. His co-winners were performers Frank Oz, Caroll Spinney, Jerry Nelson, Richard Hunt, and Fran Brill. Jim got tickets for the whole gang and they attended the ceremony together. Given that most of the awards that evening were for news or documentary programs (the entertainment awards event was held on the West Coast), it makes sense that Big Bird was called up to banter with host Dick Cavett, providing some levity to the evening – and a splash of color amongst the tuxedoed crowd.

Learn about the Emmy ceremony for the 1972/73 television season when Kermit and Cookie Monster presented. 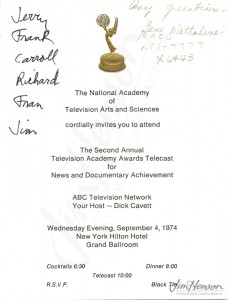 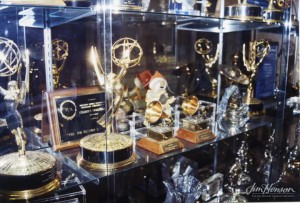 Some of the many awards, Emmy and otherwise, won by Jim and his team (and a Doozer).