Jim’s connection with Muppet Show guest star Avery Schreiber started almost a decade before the mustachioed comedian came to London to tape the show. With his comedy partner Jack Burns, Schreiber had performed on the short-lived comedy/variety show Our Place hosted by Rowlf in 1967. For that first season of The Muppet Show, Jim appealed to friends to fill out the guest star roster, and with Jack Burns serving as a writer on the program, asking Schreiber to appear was an obvious move.

Following the Electric Mayhem’s memorable performance of “Tenderly,” Schreiber (as Sir Avery of Macho) engaged in a hirsute battle with The Monster of the Moors (a.k.a. Sweetums) with commentary from intrepid reporter Kermit. Miss Piggy, in the early days of her relationship with Kermit, tried to use Schreiber to make Kermit jealous. The ensuing situation in which Kermit went from attentive to annoyed helped demonstrate the ambiguity that would eternally infuse their interactions. In the meantime, Schreiber performed a classic silent comedy number featuring Fozzie as an antagonistic portrait subject. Other short bits throughout helped establish the developing personalities of various cast members – a Beaker-less Bunsen (he worked alone that first season) failed to foil a gorilla attack with technology, Scooter tried to appease Miss Piggy, Sam Eagle tried to bring some culture via the musical stylings of Wayne and Wanda, and Fozzie channeled Jack Burns, performing “the old banana in the ear shtick” with Schreiber. The show ended with Schreiber’s charming performance on the guitar, singing nonsense with a range of Muppet birds, Koozebanians and other abstract creatures.

Schreiber’s partner Jack Burns worked with Jim on an array of projects beyond The Muppet Show including The Muppet Movie, Puppetman and The Dolly Parton Show. Read more about them here and here. 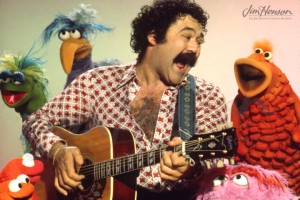 Avery Schreiber and some friends on The Muppet show, 1976.

This entry was posted in 09-September '76, 1976, Muppet Show and tagged Avery Schreiber. Bookmark the permalink.