From its inception, Fraggle Rock was designed for an international audience. The idea was that universal themes could speak to any viewer, whatever culture, but to make it feel more home-grown, local television producers would get involved in making it their own. The easiest thing would have been to just dub the entire shows into the local language, but taking an easy route was clearly not the priority for Fraggle Rock. While the program was dubbed in numerous countries including Denmark, Finland, Japan, The Netherlands, Norway, Poland, Portugal, Spain, Sweden, Turkey, Israel and Russia, Henson producer Duncan Kenworthy found a way to go further in some markets. In the UK, Germany, and France, the segments featuring Doc and Sprocket were reshot with local actors and a new set. For the British Isles, the human was a lighthouse keeper. In Germany, he was an inventor like the American Doc, but in France, though called Doc, he was a retired baker. To give him a reason for having the mechanical devices that support Doc’s script segments, the backstory in the French version was that Doc was spending his retirement in a house that he had inherited from his inventor uncle, Georges. It was a bit of a stretch, but it allowed his scenes to mesh well with what had already been taped with Fraggles.

Jim and his team would have liked to have done more full co-productions, but they depended on the financial abilities of the local production companies. Most could only spring for dubbing or some specialized Traveling Matt segments. Only the more established European producers could support the new Doc segments. Having worked on several Sesame Street co-productions, Kenworthy already had relationships with many international producers. Germany was the home of Sesamstrasse, the first Sesame co-production, so there was a comfort zone there. It made sense to do a French version because so many television markets in the world had French-speaking audiences, especially in North and West Africa.  And with England being home to The Muppet Show, it was an obvious third location for a partner.

Jim’s PR efforts in France in the fall of 1984 were worthwhile – the show was a hit there, drawing large numbers of viewers and spawning dozens of licensed products from bed sheets to planters. The French Fraggle Rock’s Doc (the Baker) was played by Michel Robin. His dog named Croquette (rather than Sprocket) was enthusiastically performed by the team of Jean-Pierre Dutour, Nancy Davoust, and David Barclay. They brought a particularly French flavor to the action. See them in a clip from “Le Retour de L’Oncle Matt” (“The Return of Uncle Matt”) which first aired in France on November 25, 1984. 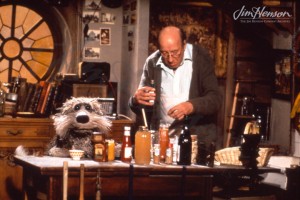 Doc (Michel Robin) and Croquette in the French version of Fraggle Rock, 1980s. 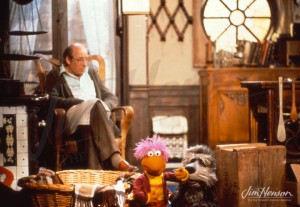 Gobo meets Croquette in the French version of Fraggle Rock. Doc (Michel Robin) does not notice.

The inside spread of the French Fraggle Rock record album.