Jim had very specific ideas about the unique sound he wanted to imbue the atmosphere of The Dark Crystal and was delighted when Trevor Jones agreed to provide the musical score. The South African composer brought tremendous experience to the project – he got his start writing the score for the Academy Award winning film The Dollar Bottom and has written music for more than one hundred film projects. In addition, Jones’s pioneering work combining acoustic and electronic music made him an ideal partner on The Dark Crystal. Jones also composed the score for Labyrinth and the series Jim Henson Presents The World of Puppetry.  Other films scored by Jones include Excalibur, Runaway Train, Angel Heart, Mississippi Burning, Last of the Mohicans , Cliffhanger, Arachnophobia, Merlin,  Sea of Love, In the Name of the Father, Richard III, and Notting Hill. He continues to be active in music education, and his honors include an Honorary Ph.D. from The University of the Western Cape South Africa conferred on him by Archbishop Desmond Tutu.

Learn details about the creation of the music for The Dark Crystal. 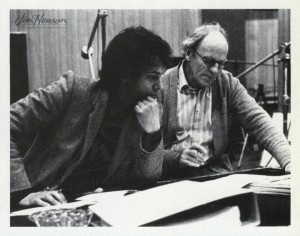 This entry was posted in 09-September '80, 1980, Dark Crystal and tagged The Dark Crystal, Trevor Jones. Bookmark the permalink.