When The Muppet Show premiered in New York (with Rita Moreno’s episode) on September 20, 1976 and in Los Angeles and Chicago a week later (with Sandy Duncan), Jim didn’t know what to expect. The critical response was warm but he was, of course, eager to see the ratings. The relatively new world of prime time access (that time slot between 7:00 and 8:00 PM reserved for syndicated or local programming) was a bit of an experiment so it was important to see who was watching. For some reason, Jim didn’t receive ratings for that first episode in New York, but as the season progressed, he saw his audience get stronger. The competition on the West Coast wasn’t much and the Muppets were on top from the start (except against sports), but in New York and Chicago, The Muppet Show was up against the popular Hollywood Squares and an intriguing program about paranormal investigations, In Search Of… It took some time to woo the demanding audience, but by the second season, Jim got his numbers. According to ITC Entertainment’s press release, “The Muppet Show is the number one rated prime time access series according to the November 1977 Arbitron sweep.” Given that the competition included Hollywood Squares, The Price is Right, Name that Tune, The Gong Show (not unlike The Muppet Show!) and Wild Kingdom, Jim would have been proud and pleased. 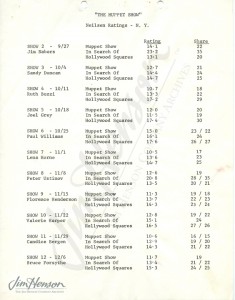 Nielsen Ratings for the New York airing of The Muppet Show, Season 1. 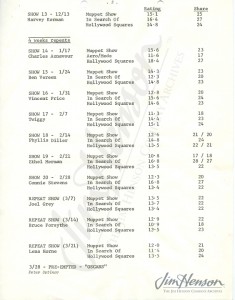 Nielsen Ratings for the New York airing of The Muppet Show, Season 1.

This entry was posted in 09-September '76 and tagged Rita Moreno. Bookmark the permalink.