In September 1984, Jim and Henson producer David Lazer met Edgar Kaiser and his colleague Robert Nixon to hear about an idea for a television series, “Aboard the Calliope: Around the World in Thirteen Hours with Muppets and Friends.” Described in the press as a “…swashbuckling, buttoned-up young mogul…with a playboy lifestyle” and a 150 foot yacht Calliope, Kaiser was, at that moment, turning his attention from his business ventures (including his role as CEO of Bank of British Columbia and Kaiser Resources and ownership of two professional sports teams) to a new foundation dedicated to lobbying governments to address addiction and mental health issues. The project he brought to Jim was an extension of that. As described in the pitch for “Aboard the Calliope,” Kaiser explained that “with the birth of each and every child, there comes a promise to renew mankind.” He felt that, “…in the process of trying to conform to the restrictions of modern society,” young people turn to alcohol, drugs and sometimes suicide – the very problems that were the focus of his foundation work. The series would combat that by opening up viewers to the variety of ways that children interact with nature in the wider world.

Henson Associates and Calliope Productions (named for Kaiser’s yacht) formed a nonprofit production company to shoot thirteen episodes of a program featuring a crew of Muppet characters and human guests aboard the, “…scientifically high-tech yacht Calliope” as they visit, “…such varied wonders as the headwaters of China’s Yangtze, the volcanic kingdoms of Indonesia, the frozen vastness of the Arctic, and the hardy peoples of Soviet Georgia.” Under the assumption that in these remote societies, children were, “…less overwhelmed by the complexities of life,” audiences would experience childhood in “…its broadest, most natural context,” and “capture the spirit and energy of…diverse creeds, colors and circumstances.”

The cast of characters proposed for the show included an adult human (and real-life) scientist and a real boy naturalist along with a Muppet “billionaire, enlightened walrus” as captain, Scooter, a macaw and a lemur. The macaw and lemur would be realistic and shots would cut back and forth between live animals and realistic characters created by the Creature Shop. Several of the projected guest stars were involved with the release of the song “We Are The World” in early1985, so the title was changed to “We Are The Children” and reference made to the lyrics in the next version of the pitch

While the Calliope project never came to fruition, Jim continued to explore opportunities to use television to bring children together around the world, to hear the rhythms of nature and improve the quality of life on earth. Learn about Jim’s 1986 idea for Muppet Voyager, another television series that traveled around the globe – this time in a spaceship rather than a yacht. 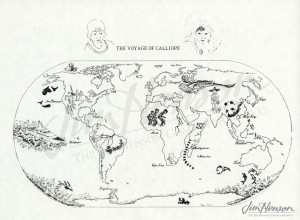 Map from the “Aboard the Calliope” series pitch, 1984. 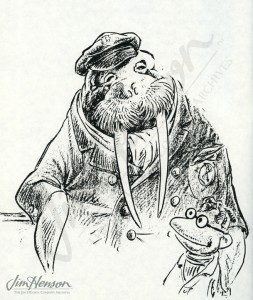 Michael Frith’s illustration of the walrus captain with Scooter for the “Aboard the Calliope” pitch, 1984.