Little Muppet Monsters, the short-lived Henson project that interspersed puppet segments featuring Classic Muppets and new Monsters with animated segments, grew out of an idea that may have been a little ahead of its time. While Muppet Babies was meant to generally encourage imaginative play, Jim hoped that Little Muppet Monsters, in which the young characters produce and transmit their own TV show, would encourage hands-on creativity, particularly in the area of television. With the advent of hand-held video cameras (the Sony Handycam debuted in 1985), it was clear to Jim that there would be an explosion of amateur filmmaking and that the simplicity of the equipment made these activities accessible to children. In an in-house interview about the relevance of Little Muppet Monsters, Jim said,

“Now kids can actually – kids, artists, all kinds of people – can do things with television. I think it’s going to change the whole way kids think about television. Before it’s always been something that kids were subject to or watched, but now they can participate in it, they can be part of that, they can manipulate it. And I think it’s a huge difference, and we’re going to see some results of this in about ten years when these kids grow up and start doing things in the medium.”

Had Jim been around for the birth of the internet, YouTube, and cell phones with video cameras, he would have witnessed his prediction become reality. It happened despite the cancellation of Little Muppet Monsters just a couple weeks into the season. Unfortunately, production fell behind on the animated segments so the show just wasn’t ready in time. Additional episodes of Muppet Babies were slotted in to fill the gap in the schedule. The Henson creative team were victims of their own success – the ratings for Muppet Babies were so good that CBS decided to continue with the double-episodes and gave up on Little Muppet Monsters. Learn more about the show’s development and the new characters. 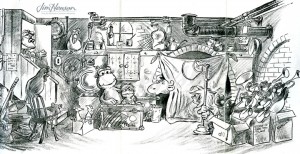 Michael Frith’s concept for the Little Muppet Monster’s studio in the basement, 1985. 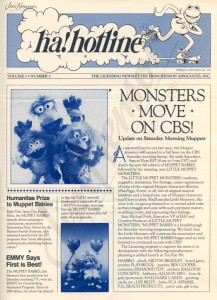 The Henson licensing department featured The Little Muppet Monsters in their newsletter, fall 1985.