“RUBBER DUCKIE MAKES DEBUT WITH THE POPS,” announced The Boston Globe on May 11, 1971. While Big Bird was star of Sesame Street’s first collaboration with the Boston Pops orchestra, it was the percussion section that the Globe staff writer John B. Wood highlighted in his review the next day. He wrote, “Charley Smith, who in his 28 years with the Boston Pops has played everything from the xylophone to bird whistle, gave a virtuoso performance last night on the rubber duckie.” This was, of course, in service of performing Jeff Moss’s runaway hit, “Rubber Duckie” with vocals by Jim as Ernie.

The orchestra played it straight and their leader, the legendary Arthur Fiedler, acted as liaison with the Sesame Street cast, bantering and teasing. Big Bird took the podium to conduct “Count 5” and his performer Caroll Spinney noted that, “I was horrified to discover they were really following me.” Cookie Monster, according to the review, “…alternately directed and upstaged the Pops orchestra from his position behind Fiedler.” Along with Ernie’s song delivered from a cut-away bathtub, Kermit performed “Bein’ Green” and Big Bird sang his alphabet song. The human cast sang several favorites and the whole group opened and closed with the theme song. A second show for inner city children was held the following afternoon. Local PBS station WGBH taped the performance, and it aired on PBS that September. Clearly Spinney’s concern about misleading the orchestra was unfounded; Big Bird was invited to conduct in concerts around the country with various groups throughout the 1970s.

Jim had a soft spot for the Boston Pops as evidenced by his comic sketch featuring a balloon-headed conductor.

Program for the Sesame Street appearance with the Boston Pops, May 10, 1971. 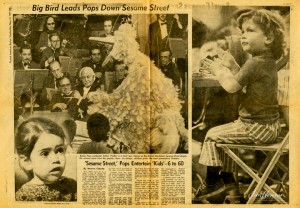 Coverage of the Sesame Street Boston Pops concert in the Boston Record American, May 12, 1971.