Meeting Jane Nebel in a University of Maryland puppetry class meant the start of a life-long partnership for Jim. At first, he saw her as a talented artist and performer who could help him realize his professional goals. Within a few years of working together, the personal connection that developed could not be ignored, and Jim and Jane were married on May 28, 1959. The personal and professional parts of Jim’s life became deeply intertwined, and Jane’s contributions were instrumental to Jim’s success. From the very start, it was clear that their shared interests went beyond romance. Shortly after their wedding, a profile in the Northern Virginia Sun was headlined, “Muppets’ Managers Merge; Aim is Network Show.” It would take more than fifteen years to reach their goal, debuting The Muppet Show in 1976, but the Hensons’ committed partnership played a large part in making it happen.

Jane brought a lot to the table. She was smart, funny and artistically inclined. For the five children that she and Jim had over ten years, Jane provided a stable parent at home when Jim was on the road. In focusing on parenting, she stepped back from performing, but she continued to be involved in many aspects of the business and helped develop many of the ancillary projects coming out of the New York office. These included arena shows, museum exhibits, the Muppet Stuff shop and puppeteer training. And when she was on-set, Jane would often lend a hand, performing a background character.

Learn more about the start of Jim and Jane’s working partnership. 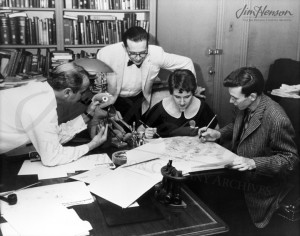 Jane Nebel was profiled in the Washington Star on January 18, 1959. 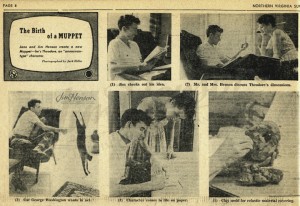 Jim and Jane (now Henson) were featured working at home in the Northern Virginia Sun, August 15, 1959.

This entry was posted in 09-September '54, 1954, Family and tagged Jane Henson, University of Maryland. Bookmark the permalink.