Jim’s excitement over the reopening of the Central Park Zoo isn’t surprising. To any New Yorker, the renovation represented a new beginning for a park that had gotten run-down and somewhat dangerous in the 1970s. Jim’s apartment at the Sherry Netherland was practically across the street and the enhancements to his front yard meant that his jaunts in the park would be that much more enjoyable. On top of that, the clear support that the Wildlife Conservation Society was receiving meant that the environmental messages that Jim embedded in his work were shared by many people.

Jim enjoyed visiting zoos going back to his childhood in the Washington suburbs. He made numerous trips to the National Zoo in nearby Rock Creek Park to observe the animals, and later, he and his wife Jane brought their sketchpads and made drawings. By observing animals, Jim could learn about their structure and how they moved and use that when he built characters. Given that he tried for realistic movement to create believable performances, it makes sense that he would have made time to study animals in real life. While these creatures did not wear pearls or sport pointed collars, their shapes and expressions would have been an inspiration in many ways. 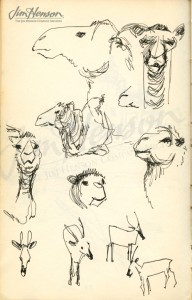 Jane Henson’s study of a camel at the National Zoo in Washington, 1959. 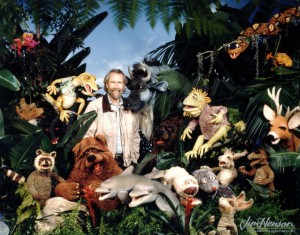 Jim with animal characters during development of W.I.L.D. , the precursor to Jim Henson’s Animal Show.