Regardless of the size of his company, Jim took special care to note the comings and goings of his employees over the years. This was particularly true in the 1960s when the addition or subtraction of a colleague could make a major difference to the interpersonal dynamic and corporate capabilities. In August 1963, Jim noted, “Carroll Conroy and Frank Oz started to work.” Bringing in performer Frank Oz, as we all know, made a huge and lasting difference to Jim’s work. Carroll, though hired as a secretary, also made a difference, filling in as a production assistant on various shoots and helping with costuming and other tasks on Time Piece. When she left, Jim hired Jay Campbell and then, in 1968, Terry Tanner. Learn about Jim’s early clerical staff. 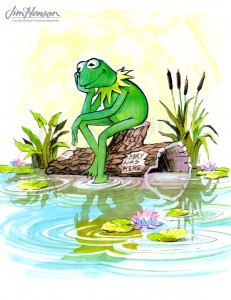 Even when the company got big, the departure of junior staffers merited attention. When licensing administrator May Chin left the company in 2000, designer Janis Beauchamp drew this heartfelt card to present to May at the goodbye party.