Jim celebrated the start of the Labyrinth film shoot with a pre-party at his Hempstead home on April 13th. The wrap party five and a half months later was a bigger affair, held on the sound stage at Elstree Studios outside London, and included about 1000 people. Clearly, the group included, beyond the cast and crew, spouses, friends, and various other people from the studio. The actual final day of shooting was September 6th, and to mark that, Jim hosted a smaller party back at his house in Hempstead that evening. 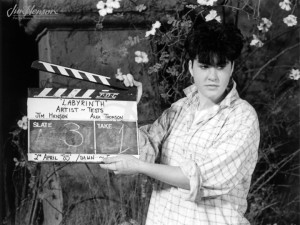 Chyna Thompson holds the director’s slate for a test in the weeks leading up to the start of the Labyrinth shoot.

This entry was posted in 08-August '85 and tagged Elstree Studios, Hempstead, Labyrinth, London. Bookmark the permalink.