Jim won dozens of awards throughout his career but the recognition he got for Time Piece, his first widely distributed film (albeit 8 ½ minutes long) was extremely gratifying. While his note in his journal about winning the Plaque Lion St. Marc, “whatever that is,” was self-effacing, Jim was clearly appreciative of the honor. That award came from the Venice Film Festival, and he also received honors from the Oberhausen Film Festival in Germany, the American Film Festival held by the Educational Film Library Association, the Council on International Nontheatrical Events (aka CINE), and, of course, the Academy of Motion Picture Arts and Sciences.

Jim did eventually receive an actual plaque from Venice, and from Oberhausen, he received a certificate of participation and 1000 Deutsche Marks. According to the go-between from the US Information Agency, the certificate and money was meant to represent first place. In return, Jim agreed to leave a copy of the film in their archives. Subsequently, the Oberhausen festival made Time Piece available for screenings in Berlin and Amsterdam. 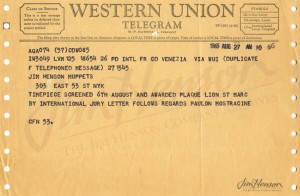 Telegram received by Jim announcing his award from the Venice Film Festival, 1965. 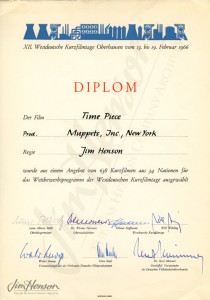 Certificate of Participation recognizing Time Piece at the Oberhausen Film Festival in Germany, 1966.