Having completed the final episode of The Muppet Show on August 22nd, Jim stopped in New York to perform Kermit at a UNICEF press conference and then flew on to Bermuda to convene a company-wide retreat for his entire staff from both sides of the Atlantic. There was a lot to reflect on and a lot to look forward to.  Along with an overview of what had come before, each division would report on their current projects and break-out production groups would look ahead to The Great Muppet Caper and The Dark Crystal, both in pre-production.

For such a large group (totaling 85), much pre-planning was needed. Administrative chief Dick Wedemeyer was put in charge of logistics. A “bounce-off group” was formed to expand on the executive group’s ideas (it was noted that they “felt strongly in favor of name tags and a meeting t-shirt”) and anonymous cards were distributed so that staffers could express their “Expectations and Concerns” relating to the planned three days. Jim and Frank Oz provided lists of videos that they wanted to show during various presentations and as entertainment.

Once everyone arrived in Bermuda, Jim showed highlights from The Muppet Show and test footage from the upcoming feature films. He presented a historical overview and then everyone broke into small groups to discuss expectations and then move into “focus seminars” to discuss things like: “What is the contribution/mission of Muppets in the world today?” and “Creativity – what it means to me, how best to achieve it?” Meals and entertainment were carefully planned with lots of opportunities to socialize, watch Muppet footage, and even participate in a “jam session.” Individual departments had work sessions that were followed by a cruise and afternoon on the beach. The whole thing was capped by a gala dinner with dancing to the Bermuda All Stars steel drum band. A final session titled “A Look Toward The Future” was led by Jim before departure. While Jim hosted a subsequent company-wide meeting in 1982 at the Sterling Forest conference center outside New York, and various executive management retreats were held at resorts from Vancouver, Canada to Bath, England in the late 1990s and early 2000s, the Bermuda meeting was long remembered as an incredibly special coming together of the Henson team. 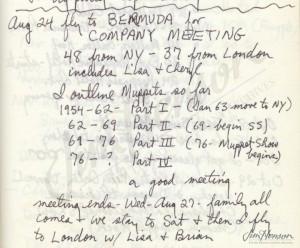 Jim’s journal entry regarding the company meeting in Bermuda, August 24-27, 1980. 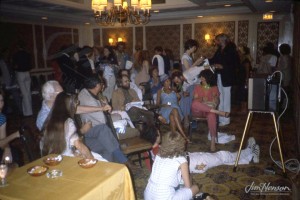 The first night of the Henson Bermuda meeting with staff gathered to watch old footage, 1980. 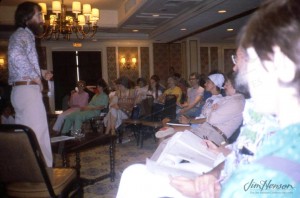 Jim’s gives an overview of all that his team has accomplished over the years at the Henson Bermuda meeting, 1980. 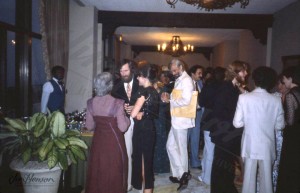 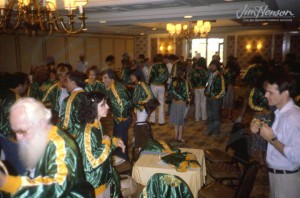 At their company meeting in Bermuda, the Henson staff receives Muppet Show jackets, 1980.