On July 20, 1987, Jim distributed to his development team (Bob Beitcher, David Lazer, Bernie Brillstein, Michael Frith, Jane Henson, Karen Barnes, Duncan Kenworthy, Martin Baker and Mira Velimirovich) a draft of a presentation that he planned to give to NBC executive Brandon Tartikoff at their meeting a month hence. Jim would be pitching what was then being called Jim Henson Presents, described as an hour of family television that would showcase the range of his work. The idea was that on Sunday nights, Jim would host and present, in monthly rotations, an hour of The Storyteller one week, and a picture book special (like The Tale of The Bunny Picnic) the next week. A third Sunday would feature “Infinite-TV” – a sort of “high tech comedy variety show,” and the fourth week would be up for grabs – it could be, “a one hour story about a little boy whose stuffed animal comes to life” or a behind the scenes documentary.

Clearly, the meeting with Tartikoff went well and by September, the team was working on a video presentation for a show now titled The Jim Henson Family Hour (and quickly revised to The Jim Henson Hour). They planned to feature Jim on camera in the Henson workshop. While he spoke (using a script by Jerry Juhl with help from Bill Prady,) various creatures around the shop would come alive and react or move about in scene-stealing ways. They shot the footage on September 25th (the day after Jim’s 51st birthday), and Jim presented to NBC on October 22nd. Good news came the week before Christmas – in his journal, Jim wrote, “NBC gives go-ahead for 13 J.H. Presents!”

The creative team went to work in January 1988 and production started in earnest that fall. The show went on the air on Friday, April 7, 1989, premiering with the audience-friendly Sesame Street 20th anniversary show. Mid-May, NBC let Jim know that there would not be a second season and moved The Jim Henson Hour to Sunday nights, and after airing the tenth show at the end of July, the series was taken off the air completely. Disappointed, Jim wrote a heart-felt memo to his extended staff lauding their efforts. In an effort to lighten the mood, he noted, “I feel that we developed the kind of high-quality family entertainment series that the network and in fact all prime-time television desperately needs. The series was really coming together nicely and I’m sure that we would have made it even better in subsequent seasons.” He went on to thank everyone for their hard work and contributions, saying, “We can really be proud of the work we did.” Jim’s ally at NBC, Brandon Tartikoff, was equally disappointed and sent Jim a handwritten note. His message included, “I am proud of the painstaking care and love and innovation you and your group put into the show. I just wish more people could have seen what we did.” 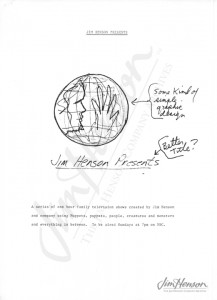 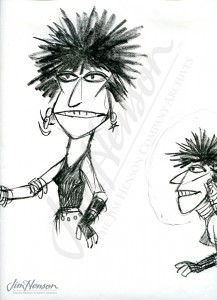 John Stephenson’s design for Zondra on The Jim Henson Hour, 1988. 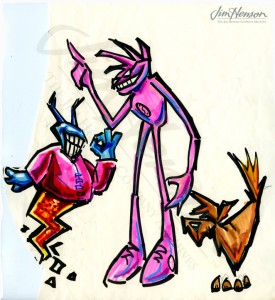 Kirk Thatcher’s design for Graffiti Monsters for the Bobby McFerrin episode of The Jim Henson Hour, 1988.