A true joy for Jim was getting the chance to meet the radio and television stars of his childhood when he hosted them on The Muppet Show. While some had more or less retired by the 1970s like Edgar Bergan and Senor Wences, others, like Milton Berle and Bob Hope, kept plugging away in films and on television specials. George Burns fell somewhere in between. Following the death of his wife and performing partner Gracie Allen in 1964, Burns stepped back from performing and became active in producing for television and was a creator and co-owner of the popular series about a talking horse, Mr. Ed. In 1975, life imitated art when a starring role in The Sunshine Boys, a feature film about the reemergence of a pair of old vaudeville stars, helped re-introduce Burns to a young audience. That led, in 1977, to the title role in Oh, God!, a feature film co-starring Jim’s friend John Denver, and numerous other film and television roles. A guest star turn on The Muppet Show seemed inevitable.

Despite Burns’ long career (which continued until just a couple years before his passing at age 100), he had never worked with puppets before. “At my age,” he noted, “I thought I had experienced everything show business has to offer. But the Muppets have added another dimension and I am privileged to appear with them.” Miss Piggy, in particular, made an impression with her opening number “Quanto Le Gusta,” and Burns was smitten. He remembered her nine years later when he wrote to thank Jim for sending a birthday present, “Thanks for thinking of me on my 90th. I’ve reached the age now where Miss Piggy is starting to look sexy to me. Best to all, George.” 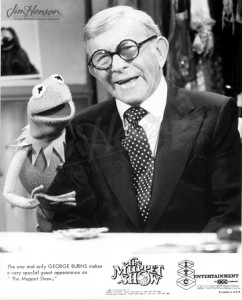 George Burns and Kermit on The Muppet Show, 1977. 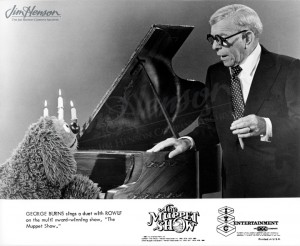 George Burns and Rowlf on The Muppet Show, 1977.