Jim attended the 1984 UNIMA (Union Internationale de la Marionnette) puppet festival in what was then East Germany with his daughter Cheryl. She continues to be actively involved in the puppetry community in many ways, particularly in her role as President of The Jim Henson Foundation. She recently shared her memories of the Dresden trip:

Jim did his best to get to the UNIMA festivals, which were held every four years, generally alternating between cities on either side of what was then called the Iron Curtain. The festival in 1976 had been in Moscow (my father had not been able to attend as they were taping the first season of The Muppet Show.) The one in 1980 was held in Washington, DC and was produced by UNIMA-USA of which Jim was President and Puppeteers of America of which Nancy Staub was Executive Director. We were particularly interested in getting to this one as Jim had arranged to meet Sergei Obraztsov to discuss coming to Moscow to feature him in one of the episodes of his series on great puppeteers, Jim Henson Presents The World of Puppetry.

Jim had followed the work of Obraztsov for many years and had been influenced by his book, My Profession, when he was first starting out. The international puppetry community was not large and made a real effort to stay in touch with what other people were doing. Nancy Staub was a great friend of Obraztsov’s. His theater, “The Central Puppet Theater” in Moscow was famous throughout the eastern block and their work had influenced many companies (some would say at the expense of a wider range of individual styles, but there were well over 300 puppet theaters in the Soviet Union due in no small part to Obraztsov’s influence.)  I had studied Russian for a year at Yale and had spent a summer there in 1982. We were eager to make arrangements to go to Moscow at the end of the year in 1984 to tape a special about this important puppeteer. He was an older man (having achieved his stature entertaining soldiers at the front during the Second World War) and it meant a lot for dad to be able to include him.

We were also there to see puppet shows and enjoy the company of other puppeteers. Wonderful young American artists like Janie Geiser, Paul Zaloom, Eric Bass and Roman Paska, as well as beloved pillars of our community like Allelu Kurten and Vince Anthony. We spent a lot of time hanging out with the great Bil Baird and his son Peter (both extraordinary marionettists, famed for their Davey Jones Locker and many, many other productions).

There were a range of international shows to see. I recall being very impressed by an innovative performance by the Czech company DRAK directed by Joseph Krofta. We later invited DRAK to perform at our first Henson International Festival of Puppet Theater at the Public Theater in NYC in 1992, where they performed a dark Eastern European version of Pinocchio, wonderful.

Dresden was very different then. The city was bleak and felt dangerous at night.  I was accosted on a road walking back from the puppet cabaret by a local who didn’t get all the fun the puppeteers were trying to muster. It is amazing how much that part of the world has changed. 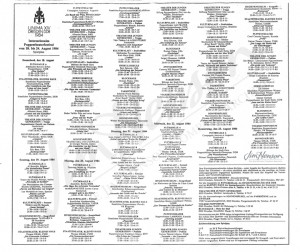 The schedule (“spielplan”) of performances during the 1984 UNIMA festival in Dresden, East Germany which Jim attended with his daughter Cheryl. 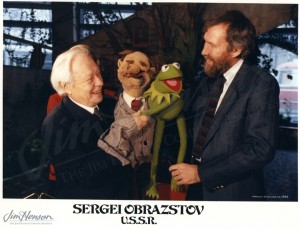 Jim and Sergei Obraztsov in the 1980s. 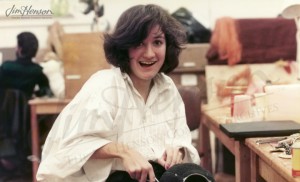 Cheryl Henson in the Creature Shop working on Labyrinth, 1985.