When dancer, singer, actor, choreographer, and director Gene Kelly came into the studio to tape his guest star turn on The Muppet Show, Jim and his team were feeling a big nostalgic. Their nostalgia was not for the golden age of Hollywood that was celebrated in the That’s Entertainment film franchise that had recently reignited interest in Kelly’s work – instead, they were thinking back over the previous five years as this would be the final Muppet Show episode to be produced. The big wrap party had already occurred the night before and now, with a script filled with hints of the end of the series, Kermit and the gang were closing out a chapter in their careers, planning a move back to the States, and looking ahead to what was to come.

Kelly was a good choice as final guest star. Not only was he internationally known and loved and, like the Muppets, multi-talented, but he had a similar set of ideals. In The Muppet Movie, Kermit (echoing Jim’s view) said, “I’ve got a dream…it’s about singing and dancing and making people happy.” When asked about his work, Kelly explained, “I’m in show business to make people happy. That’s my philosophy in life and my particular talent.”

Using the conceit that Kelly believed he had only been invited to watch The Muppet Show as a framing device, the writers had him viewing signature sketches that hinted that the end was nigh. With fortune telling cards, Beauregard prognosticated the end of the world and harped on his fear in each backstage bit. The cast of “Veterinarian’s Hospital” seemed to cure their patient and, in another first, the announcer appeared after 119 episodes of mystery. The “Pigs in Space” came to the end of the universe and had the opportunity to learn the meaning of life (which they missed, of course,) and they also met the announcer. And the final scene, when Kelly was finally lured into singing a medley of his best-known songs, was a coming together of the whole cast in a charming moment of warmth. As Kelly danced off the Singing in The Rain set to the final notes, he served as their proxy and there is a quiet sense of a wistful ending. But Jim, of course, cognizant of the eternal nature of syndicated television, left the audience with Kermit’s exhortation, “We’ll see you next time on The Muppet Show!” 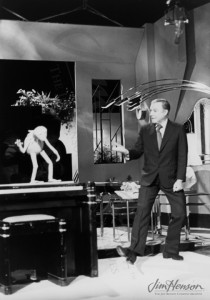 Gene Kelly and Kermit tap dance together on The Muppet Show, 1980. 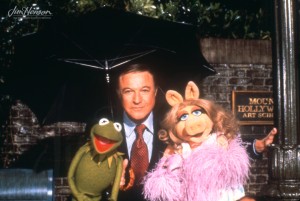 Gene Kelly with Kermit and Miss Piggy on The Muppet Show, 1980.

This entry was posted in 08-August '80, Muppet Show and tagged Gene Kelly, Kermit, The Muppet Show. Bookmark the permalink.