For two decades, those of us working on documenting Jim Henson’s story have been curious about a minor project which led to major things: a 1965 pilot for a television series based on Cinderella. In creating puppets and performing on this half-hour program, Jim collaborated for the first time with Jon Stone, who would go on to help create Sesame Street and recruit Jim for that show, and Joe Raposo, Sesame Street’s first music director and composer of Kermit’s signature song, “Bein’ Green.”  The script for Cinderella was written by Jon Stone and Tom Whedon (who became a CTW writer) and Raposo did the music. The script and correspondence were in the files and Jim’s character sketches were in the art drawers. In an interview in the mid-1990s, Jon Stone talked about how it all came together and when it didn’t sell, was reworked into Jim’s 1968 television special, Hey Cinderella! But we couldn’t find the original footage. In a five year project recataloguing all 75,000 items in our media collection, we made finding Cinderella a priority. But it didn’t turn up.

It seemed like Jim saved everything, so we were puzzled that this show was missing. We made some inquiries to no avail.  Late last year, out of the blue, we were contacted by the sons of Robert Lawrence, the producer in Toronto in whose studio Jim had made Hey Cinderella!, The Frog Prince and The Muppet Musicians of Bremen. They were cleaning out Lawrence’s film collection and had come upon a black and white 16mm film that seemed to be an early version of Hey Cinderella! featuring Kermit and other Muppet-like characters. Eureka! They had found the missing footage. Jim must have sent his copy up to Robert Lawrence as a sample of what they could do on Hey Cinderella! and there it remained for forty-five years.

It was exciting to see this early moment in Jim’s creative development and the charming genesis of his later special. Along with the puppet characters, Jerry Nelson, in one of his first performances with Jim, played the Black Duke, a hybrid character that had Jerry on camera but with the top half of his face and head covered by a puppet head. The other humans on camera included veteran TV and stage actor Elaine Hyman, Will Mackenzie who has gone on to have a successful career as a TV director, Mary Louise Wilson who was recently honored with a Tony Award nomination, and in the lead, Broadway ingénue Jill O’Hara, sister of Jenny O’Hara who appeared in Jim’s Linit Fabric Finish commercials. The show was directed by Bob Schwarz who went on to direct episodes of Sesame Street and The Electric Company along with other programs.

The Lawrence family has provided the footage to the Henson Archives and The Jim Henson Legacy, and has generously donated a copy to The Paley Center for Media so that Cinderella will be available for public viewing. Stay tuned for future plans for a special event debuting the show at The Paley Center.

Read about Jim’s collaboration with Jon Stone and Tom Whedon on Cinderella in 1965. 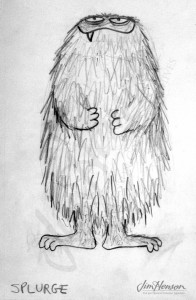 Jim’s original sketch design of Splurge who made his debut in the 1965 pilot Cinderella.