When Jim started his journal in 1965, he went back and filled in the years leading up to that point. Sometimes, his memory was off by a month or so. In the case of his and Jane’s New England vacation the first summer of their marriage, it was a rambling trip in July rather than August. Based on the sketches in Jim’s journal, the Hensons travelled by car, stopping in Stonington, Connecticut on their way to the Newport Jazz Festival in Rhode Island. They celebrated July 4th with a visit to a colonial-era house in Deerfield, Massachusetts and crossed the requisite covered bridge in Vermont. They saw friends Jim and Judy Marshall at a lakeside camp in Rangeley, Maine and then headed to the coast where both Jim and Jane sketched the lighthouse at Pemaquid Point. 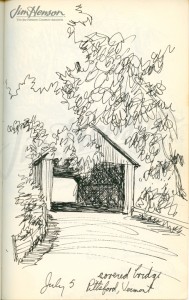 Jim’s sketch of a covered bridge in Vermont, 1959. 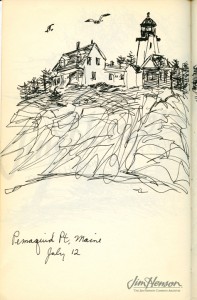 Jim’s sketch of the lighthouse at Pemaquid Point in Maine, 1959. 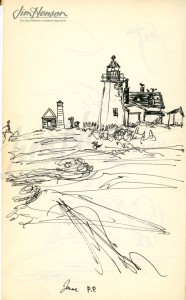 Jane Henson’s sketch of the lighthouse at Pemaquid Point in Maine, 1959.