With the premiere of Sesame Street planned for November 1969, there was much to do in the preceding six months. Along with shooting his first series of counting films, Jim was, of course, heavily involved in the creation of the first pilots. The shows were put together to test the content and format on the target audience to see what did and didn’t work. Jim and Frank Oz worked with director Jon Stone to create Muppet pieces to be inserted into the flow of the show. The scenes on the street featured only humans as the educators behind the series felt it was important to separate fantasy from reality. When the test viewers showed greater interest in the Muppet segments than the human ones, it was clear that Muppets needed to be integrated into the street scenes. At that point, toward the end of the summer, Big Bird was born and has been a neighbor on Sesame Street for almost forty-five years.

Learn more about the development of Big Bird and his performer, Caroll Spinney. 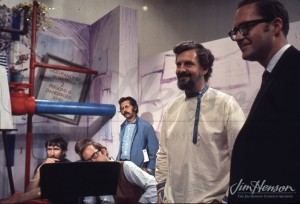 On set during the taping of a Sesame Street pilot show in July 1969. From left to right: Jim, Frank Oz, Don Sahlin, Jon Stone, Dave Connell. 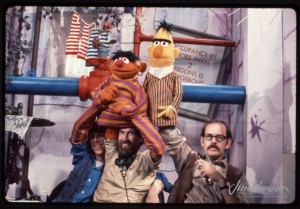 Jim and Frank Oz performing Ernie and Bert for a Sesame Street pilot show in July 1969. 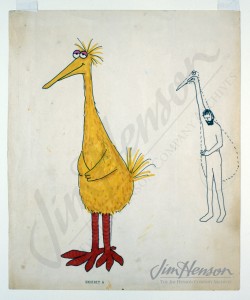