Jim Henson throughout his career found great joy in pieces involving slapstick puppetry where characters would be beaten, eaten, bruised, and battered. The episode of The Muppet Show with country music icon Kenny Rogers is no exception. Throughout the show, Kermit is hurled from a circus trapeze, is clobbered by an overhead light in a Veterinarian’s Hospital segment, tumbles down a staircase in a wheelchair, and is sent flying through the air in a catapult belonging to the Great Gonzo, where he lands in Statler and Waldorf’s stage left theatre balcony. With Kermit in a wheelchair due to a twisted flipper and numerous other afflictions, the other Muppets keep the show going by introducing acts with Kermit’s signature arm flailing “Yaay,” and by keeping guest star, Kenny Rogers assured that the show will go on.

Rogers, who was born in Houston, Texas, had his first musical hit at the age of 19 with the song, “Crazy Feeling.” He has collaborated with many singers, including Dolly Parton, throughout his successful career, has done 32 studio albums, 80 singles, and many more recordings since the 1970s. Currently, he is touring throughout America, doing concerts and special appearances. He has also won numerous music awards including Grammys, American Music Awards, and honors from other groups. On filming The Muppet Show, he said, the great thing… is that they use their guest stars creatively- that’s very rare in television. I feel there’s such an under abundance of fun television and that’s what this show is all about – fun.”

After taking a beating, Kermit, from a hospital bed, performs the song “Lime in The Coconut,” along with nurses and a doctor who slowly turn into tribal jungle figures. To complete the hysteria, the hospital room transforms into a rainforest set, with a gorilla leaping through the trees, tigers at his headboard, and snakes in the sheets. This episode also features a group of Muppet Arabs who with their robes, machinery and camel, make everything more difficult for The Muppet Show cast as they drill for oil in Kenny’s dressing room (J.P. Grosse, Scooter’s Uncle and theater owner, has sold the underlying oil rights.) Rogers’ musical highlights showcase songs he has written. His first, ‘The Gambler,” is a haunting performance on a train with three old men Muppets, one of which dies during the song and reappears as a dancing spirit. His second is the uplifting “Love Lifted Me,” which the Muppets join together in singing as peace returns to the theater, the Arabs strike oil, and Kermit gets back on his feet, bringing another show to a close. 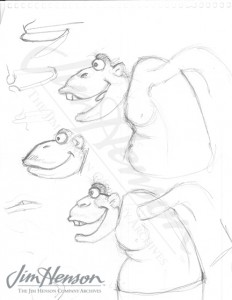 Design for Quongo the Gorilla that appeared in “The Lime in The Coconut” musical number and various Muppet Show episodes. 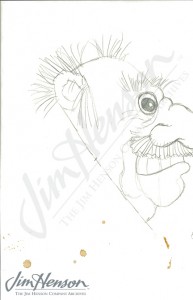 Builder Mari Kaestle’s sketch of the humanoid Muppet, J.P. Grosse, who is Scooter’s uncle and the owner of The Muppet Theater. He is responsible for the Arabs’ involvement in the Kenny Rogers Muppet Show episode. 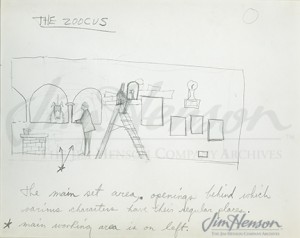 Jim’s circa 1960 idea for television variety show, The Zoocus, demonstrating Jim’s interest in a circus-like production which would become The Muppet Show. 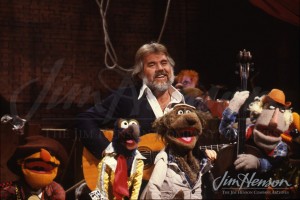