Teresa Brewer, who as a teenager in the early 1950s was known as “the little girl with the big voice” started her career with pop hits like “Music, Music, Music.” Like Jim and his Muppets, Brewer made appearances on all the major variety shows including those hosted by Ed Sullivan and Perry Como. By the 1970s, she had established herself as a major jazz voice, starting with an album of Bessie Smith songs. Only a few years older than Jim, Brewer’s teen music would have been part of the soundtrack of his early years, and it’s not surprising that he recruited this major talent to guest star on the second season of The Muppet Show.

Brewer seemed to fit right in, bonding with Miss Piggy over their girl-talk about weight problems. She demonstrated her versatility with the country number “The Old Cotton Fields” and got to do her hit “Music, Music, Music.” Brewer was a charming guest and worked well with the characters. Viewers were also treated to some real trademark moments of the individual cast members. Animal did a drum solo to “Wild Thing,” Gonzo recited Shakespeare, Dr. Teeth sang an ode to cheesecake (with a singing cheesecake), Bunsen and Beaker tried out an electric nose warmer, Scooter joined some frogs “At The Hop,” and Sweetums gets his own bit with the guest star. 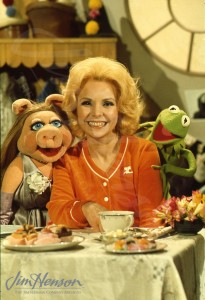 Teresa Brewer with Miss Piggy and Kermit on The Muppet Show, 1977. 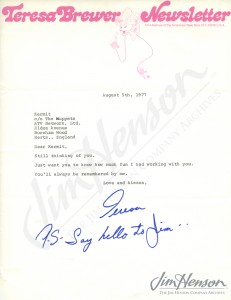 Brewer’s thank-you letter to Kermit after appearing on The Muppet Show, 1977.

This entry was posted in 07-July '77, 1977, Muppet Show and tagged Muppets, Teresa Brewer. Bookmark the permalink.