About eight months after Sesame Street’s premiere and with much hand-wringing, Jim decided to approach Children’s Television Workshop head Joan Ganz Cooney about starting a merchandizing program. According to Jim’s agent Bernie Brillstein, Jim was concerned that it was “undignified,” but Brillstein convinced Jim that the revenues that he would receive would make him financially independent – a real gift for any artist – and that it would allow CTW to expand its educational work. Jim brought in entertainment executive, Jay Emmett (founder of the Licensing Corporation of America,) to meet with Cooney and discuss a possible program. While Cooney cautiously agreed to pursue licensing, she wanted it run in-house where CTW could retain complete control, ensuring quality. That is the route they took, starting with books and record albums, and then branching out into dozens of areas as the years wore on.

Learn about the first Sesame Street products and the care that went into their development and marketing. 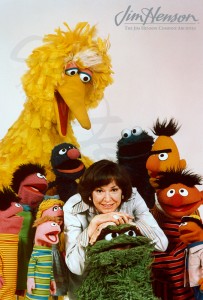