On August 4, 1977, Jim typed up a rough treatment for a story about the only surviving member of the Eunaze race, a boy named Brian, son of Malcolm the Wise, the ousted ruler. He is raised by the Bada, the “strange and mystical wizards” of the Mitha region which is ruled by the Reptus group. They are, “sunken in character, depraved, corrupt and vicious, and cruel to one another.” The brief document fills in some details about each character group and describes their physical world:

“…woodland…its tonal qualities are earthy and muted. Its inhabitants and creatures, although extensions of the total environment, function in specific and separate regions, both about and below Mithra’s landed surface. Living things in Mithra possess abilities of speech, locomotion, hearing, smell, and taste. The mountains converse with one another in incomplete thought phrases. Although sometimes forgetful, they are environmental historians, witnesses to all past and present. Rocks and boulders are not stationary, they can maneuver under their own powers.”

That month, he made a deal to work with Brian Froud on creating a film, and they set about developing the characters and story. By February 1978, Jim had written a story outline called “The Crystal” featuring a Gelfling named Jen and the basic elements that would make up The Dark Crystal. Much of that year was spent creating prototype characters, testing them on camera, and creating a document to pitch the film to potential backers. This would be a multipage booklet, printed in sepia colored ink featuring Froud’s illustrations and text handwritten by Michael Frith. Color photographs of the prototype puppets taken outdoors were adhered to the back pages. Jim brought on David Odell in 1979 to write a screenplay and that summer, Jim was ready to fly to New York from London to present his pitch book to executives at Paramount. While they were not interested, Jim’s Muppet Show backer Lord Lew Grade believed in Jim and agreed to finance the film.

See test footage from 1978 of rough versions of the characters outdoors. (Look out for a very realistic cat in the final seconds.) Here and here.

For all things related to The Dark Crystal, check out www.darkcrystal.com. 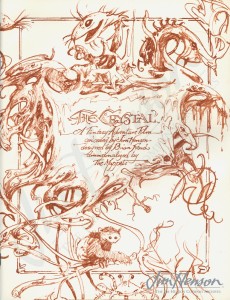 Front cover of The Crystal pitch brochure with illustrations by Brian Froud and lettering by Michael Frith, 1978. 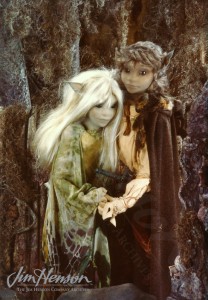 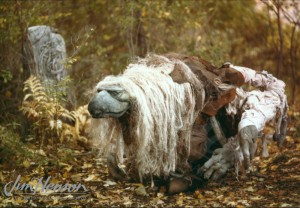