When Kermit realized that The Muppet Show episode featuring guest star Phyllis George was going to serve as the awards show for the “Muppet Academy of Arts and Sciences,” Kermit exclaimed, “I hate awards shows!” and handed off the hosting duties to George. She was a good choice – following a start as a child prodigy on the piano and a cheerleader, George was named Miss Texas and then Miss America in 1971. She worked as a sportscaster in the early 1970s and was a host and news anchor on several programs over the next decade. She was ideal in introducing the various categories like Best Song, Best Sketch, or Funniest Comedy Performance by A Bear (Fozzie did not win.). And George’s singing skills shone when she sang a duet with Rowlf, one of his favorite silly songs (and no doubt a favorite of Jim and head writer Jerry Juhl) “Carbon Paper.” Kermit was lured back on stage at the end when, much to Miss Piggy’s chagrin, he won Performer of the Year.

Having been both honoree and entertainment at many awards ceremonies, Jim and his team had fun parodying them, and the format offered a nice way to link the various sketches that made up the show. The categories, like Best Performance by An Inanimate Object and Best Foreign Act, helped showcase some of the less visible characters. In a knowing wink at the memorial sections of other awards shows, Jim also anticipated the fast patter song of Oscars host Billy Crystal or the rap wrap-up at the Tony Awards from Neil Patrick Harris when Scooter sang a tribute to all of The Muppet Show guest stars to the tune of Gilbert and Sullivan’s “The Modern Major General.”

Shortly after appearing on the show, Phyllis George married Kentucky Governor John Brown. As with all of his guest stars, Jim stayed in touch and sent Muppet goodies to George each year. As the first lady of Kentucky, she wrote to Jim on several occasions to thank him, noting in 1980 that her newborn son Lincoln was, “well on his way to becoming a number one Muppet fan!” Two years later, in a letter congratulating Jim on being the recipient of the March of Dimes Jack Benny memorial Award, she reiterated her son’s fandom and her own love for the Muppets. 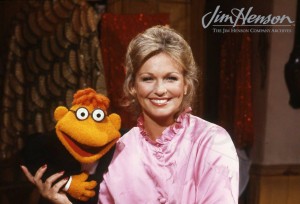 Phyllis George and Scooter on The Muppet Show, 1979.