Entertainer and civil rights activist Lena Horne was happy to appear with the Muppets on both commercial and educational television. She sang “Bein’ Green” and the alphabet and taught Grover how to say “How Do You Do” on Sesame Street. For the first season of The Muppet Show, Jim called on many of his Sesame Street contacts to fill out his guest star pool. Horne was delighted to help out and had a great rapport with Kermit and his team. Gonzo, in particular, found Horne to be extremely sympathetic, sharing a duet of “I’m Glad There Is You.” And the whole gang sang another Joe Raposo classic from Sesame Street, “Sing” to end the episode. 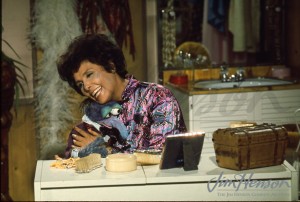