As with all of his projects, Jim took great interest in every aspect of the Sesame Street Live arena show. With a planned premiere in September 1980, it’s not surprising that Jim spent his free day between tapings of the Hal Linden and Marty Feldman Muppet Shows to fly home from London to check on the costumes for the live show. That August, along with the final Muppet Show tapings and preproduction for The Great Muppet Caper, Jim and his Sesame Street colleagues recorded the audio for the live show. Growing out of the Sesame Street Ice Follies shows, the live shows would prove to be enduringly popular and new iterations continue to sell out arenas today. 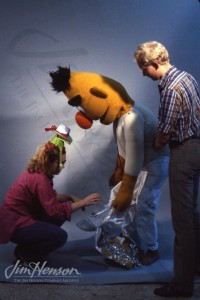 Bert gets help dressing for his arena show appearance in 1982. 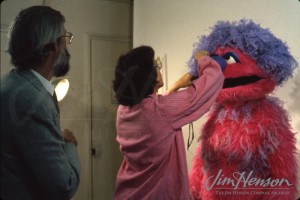 Michael Frith looks on as Caroly Wilcox adjusts a character for the Sesame Jamboree live show, 1982.