When the graduation season is in full swing, colleges seek interesting and entertaining speakers for the various events celebrating their students. Lisa Henson, Jim’s daughter, was a visible member of the Harvard class of 1982 (finishing up her degree in 1983 after taking time off to work with her dad) and served as an prominent editor of The Harvard Lampoon (other Lampoon alum that worked with Jim include Michael Frith and Chris Cerf.) When it came time for Lisa’s class to graduate, it’s no surprise that Kermit the Frog was asked to speak.

Kermit did not present the commencement speech (that ceremony featured words from John Kenneth Galbraith, Mother Theresa and John Finely), but he shared his wisdom with a smaller audience in Sanders Hall, a historic theater in Memorial Hall, a day or two before. Lisa outlined his speech, and then she, Jim and her fellow Lampoon member Jay Itzkowitz penned Kermit’s words. It must have been raining heavily that day – Kermit noted, “This is great weather for frogs. I just now swam over here from the Hyatt Regency – and I didn’t even have to use the river.” Kermit continued in a comic vein, gently poking fun at the sense of superiority that might come with a Harvard degree but mostly satirizing the solemn words of wisdom found in most commencement speeches. In general, Kermit’s words sent the message that one shouldn’t take oneself too seriously and should realize that graduation is just a starting point in the great adventure of adult life. “Graduation is a turning point, a crisis, a sharp little pain as when you tear a Band-Aid off your knee,” he noted. With his characteristic optimism, Kermit added, “But from here on, it’s smooth sailing on friendly seas.” 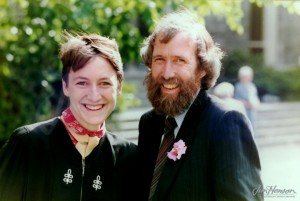 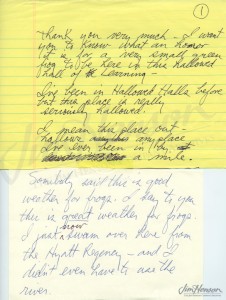 A page from Jim’s handwritten draft of Kermit’s Harvard speech, 1982.