Starting out as a song writer in 1949, Charles Aznavour became a singing sensation and powerful box office draw, expanding into film acting in the 1960s. His popularity around the world (which continues – he still performs internationally) made him an obvious candidate as a Muppet Show guest star. On the show, he performed one of his own hit songs, “Old Fashioned Way,” as well as a Muppet favorite, “Inchworm.” Despite his varied career, this was Aznavour’s first experience performing with puppets and he was a natural. His sophistication was a contrast to a more down home segment, the Googalala Jubilee Jug Band singing, “Does Your Chewing Gum Lose Its Flavor?” 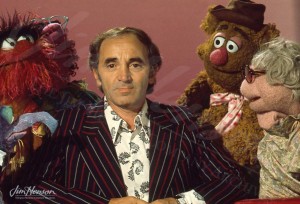 Charles Aznavour on The Muppet Show, 1976.

This entry was posted in 06-June '76, 1976, Muppet Show and tagged Charles Aznavour. Bookmark the permalink.