To market Jim’s third Muppet feature film The Muppets Take Manhattan, there were numerous movie-themed products and promotions with Cheerios, Frito-Lay, Oral-B toothbrushes, and various Post cereals in Canada. The standard television and print marketing was put in place, there was a special movie magazine filled with production photos, and as was done for The Dark Crystal and Labyrinth, Jim’s team created an exhibit to celebrate the film. It was displayed in a historical building called “The Dairy” in Jim’s backyard, New York’s Central Park (a featured location in the film), and ran from June 30 – Sept 3, 1984.

Learn more about promotion of The Muppets Take Manhattan. 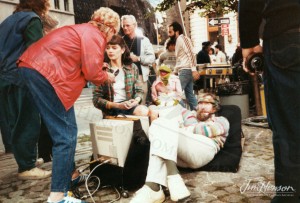 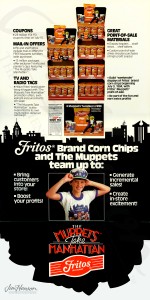 Brochure relating to the Frito-Lay promotion of The Muppets Take Manhattan, 1984.