After rejecting an opening number with a ballet-dancing gorilla, Statler and Waldorf uncharacteristically performed a musical number themselves, “Take Ten Terrific Girls.” At Kermit’s request, Fozzie, in his standard confused fashion, introduced the great “country singer Bev Sills.” She gamely sang the cowboy classic “When The Bloom Is On The Sage” in operatic style. Jim always tried to give guest stars the chance try something out of their usual area and Sills was no exception. She was happy to show off her very substantial tap dancing skills and as the cultural snob Sam Eagle approached to “worship at her feet,” he was shocked to find her practicing hanging a spoon from her nose with Gonzo – not what Sam expected of an opera star. She did devote the remainder of her show to her production of “Pigaletto.”

The Sills episode is memorable for a couple of segments without the star. Twin characters, the Fuzz Brothers, were abstract, complicated puppets that combined soft materials with human mouths (and beards!). Not one to waste a good idea, Jim also pulled out a concept from one of his Broadway Show proposals from the early 1970s and had Sam Eagle in professor mode examine the microscopic “World of the Water Drop” focusing in on Kermit and Fozzie amoebas telling bad biology jokes. The highlight was, however, the final number with Sills — a mash-up of opera parodies showcasing of her terrific singing with a bunch of pigs.

The show was a rewarding experience for all involved and was nominated for a Writer’s Guild Award. The following year, when asked for a testimonial for the program of Sills’ farewell concert with the New York City Opera, Frank Oz penned words from Miss Piggy, “Moi for one feels privileged to have worked with Beverly Sills on The Muppet Show. Talented, kind, funny, beautiful, vulnerable, strong – yes, I am all those things, but Beverly Sills has a certain uniqueness that only another superstar like moi can understand. She is one of a kind. Sure, she’s not a pig, but not many of us are perfect. About Beverly Sills, moi can only say what moi feels in moi’s second language: ‘Viva Bubbles!’” 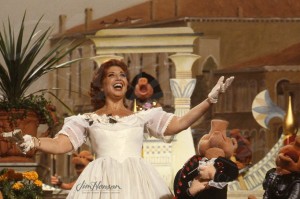 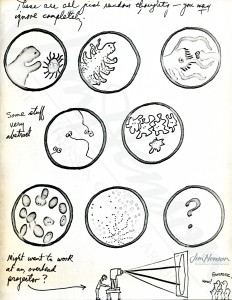 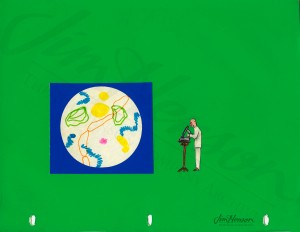 Jim’s presentation illustration for his Broadway Show concept featuring the view through a microscope, early 1970s.