Jim attended his first Puppeteers of America festival in Detroit in 1960 and became active in the organization. In 1962, his enthusiasm and commitment led to his election as President of the organization, responsible for organizing the annual festival the following June. That year, it was held in the foothills of the Catskill Mountains at the Morningside Hotel in Hurleyville, NY. With his co-chairman Earl Wertheim and a dedicated team, Jim organized five days of meetings, workshops, screenings, and performances.

Among the many offerings that week were performances from a range of talents including George Creegan, Nancy Cole, George Latshaw (who would work with Jim on some early projects), Jan Falkenstein, and, of course, the Muppets. Jerry Juhl helped run several script workshops, and Don Sahlin partnered with animation expert Lou Bunin (and brother of “Lucky Pup” puppeteer Morey Bunin) to teach about stop-motion puppetry. Other members taught workshops in marionette, rod, and hand puppet manipulation and construction, and Rod Young organized the popular late night “Pot Pourri” – a sort of open mic for puppetry.

Learn more about the Puppeteers of America and their upcoming festival, August 5 -10, 2013 at Swarthmore College near Philadelphia. 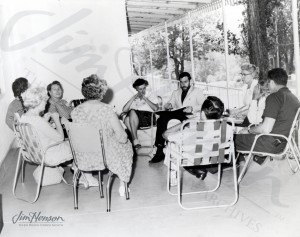 Jim meeting with members of the Puppeteers of America during their annual festival in 1963.

Program for the 1960 Puppeteers of America festival with a cover designed by Jim’s co-chair Earl Wertheim. 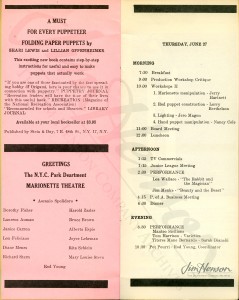 Program page from the 1960 Puppeteers of America festival.