In recognition of guest star Arlo Guthrie’s folk music bona fides (son of Woody, writer of “Alice’s Restaurant”), his episode of The Muppet Show was a celebration of down-home music and country living. The “quiet family evening” promised by Kermit at the start was interrupted by the Swedish Chef’s pursuit of a wild turkey. This became the recurring motif for the backstage story as the Chef tried to vanquish the uncooperative fowl. Kermit, channeling Jim’s appreciation for his Mississippi roots, emphasized the sophistication of the countryside when he introduced a musical number featuring a cow cotillion. In keeping with the theme of the show, the “At the Dance” sequence naturally featured a square dance, and Guthrie explained the traditional cowboy song “Whoopee Ti Yi Yo” to a bunch of “dogies”. Things settled down at the end as Guthrie sang the folk ballad, “Sailing Down The Golden River.” Explaining that his children were fans, he brought his son Abraham over from the States to join him on set. Guthrie was a fan, too, and noted, “The Muppets are marvelous, they’re real, and they bring out the child in us all.” 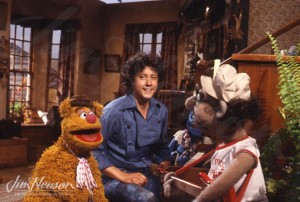 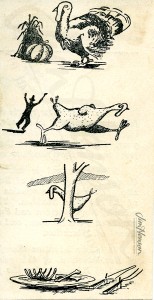 The turkey in Jim’s cartoon for a high school publication (c.1953) was not as lucky as the one pursued by the Swedish Chef on The Muppet Show.

This entry was posted in Uncategorized and tagged Arlo Guthrie, Kermit, Swedish Chef. Bookmark the permalink.