Learning by doing was the driving idea behind the Play-Along video series produced by Jim and his team in 1988 with Lorimar Home Video. Jim felt that kids could learn from all sorts of activities even if they were not obviously educational. Skipping stones on a pond or at the beach took self-control, concentration and persistence – and it was fun to seemingly challenge (but actually exploit) the laws of physics by making a stone bounce off the water rather than sinking into it. It also got you out into nature, something Jim found to be inspiring. When asked about what was important to him, he noted:

“I find that it’s very important for me to stop every now and then and get recharged and reinspired. The beauty of nature has been one of the great inspirations in my life. Growing up as an artist, I’ve always been in awe of the incredible beauty of every last bit of design in nature. The wonderful color schemes of nature, that always work harmoniously, are particularly dazzling to me. I love to lie in an open field looking up at the sky. One of my happiest moments of inspiration came to me many years ago as I lay on the grass, looking up into the leaves and branches of a big old tree in California. I remember feeling very much a part of everything and everyone.”

Learn more about the Play-Along videos produced with Lorimar. 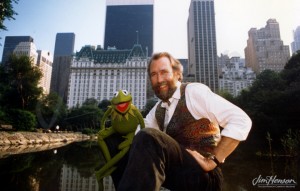 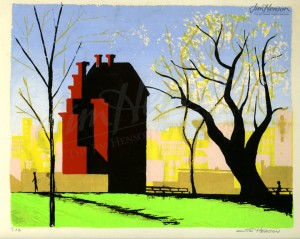 Jim’s silkscreen of a figure sitting beneath a large tree, 1950s.