For the second Muppet movie and Jim’s first feature film directing effort, The Great Muppet Caper, he pulled out all the stops. He knew what worked on the big screen from his first film and having done production in the UK over the previous years on The Muppet Show, he had a great sense for local behind-the-scenes contributors. He didn’t let an ocean get in the way, though, and brought together a team that represented the most talented people he knew from both shores. He had worked with Sesame Street composer Joe Raposo on various projects during the previous fifteen years and was excited to have him provide what turned out to be Academy Award nominated songs for the film. And with the extravagant production numbers planned for Caper, he asked experience television pro Anita Mann to do the choreography. Jim had probably met Mann when he did Cher’s variety show in 1975, and she was nominated for an Emmy for her work for Jim on The Muppets Go Hollywood in 1979. The Caper dance numbers would be a challenge as they included formal night club productions numbers, water ballet and puppets!

Learn more about the extravagant water ballet in The Great Muppet Caper
and about Joe Raposo’s work with Jim and his contributions to the film. 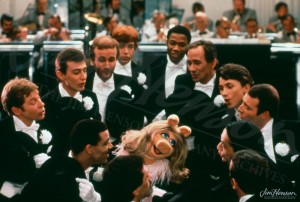 Miss Piggy in an extravagant dance number in The Great Muppet Caper, 1981. 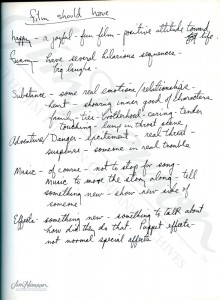 Jim’s notes for what should be included in his ambitious second feature, The Great Muppet Caper, c. 1980.