Jim’s appreciation for all types of performance was wide-ranging and included a variety of puppetry, dance, and innovative body movement work. It’s not surprising that for the fourth season of The Muppet Show, Jim included the renowned mime artists, Shields & Yarnell (Robert & Lorene), on the guest star roster. Their performance mimicking robots’ machine-like movements nicely countered Jim’s effort to have his man-made characters move in a natural, realistic fashion. While some guest stars didn’t quite fit in the show and were relegated to some backstage conversation and perhaps one musical number, Shields & Yarnell were clearly right at home in the Muppet theater and did an array of presentations – along with a robot breakfast, they did a bit in a western saloon, animal impressions, and had interactions with Scooter and Gonzo. Fozzie, terrifically hopeless as a mime, provided plenty of fodder for Statler and Waldorf’s heckling. Appropriately, this episode is the source of their classic exchange clearly illustrating their relationship with the show:

Waldorf: “Just when you think the show is terrible, something wonderful happens.”
Statler: “What?”
Waldorf: “It ends.” 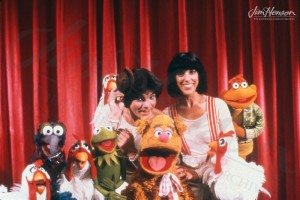 This entry was posted in 05-May '79, 1979, Muppet Show and tagged Shields & Yarnell, Statler and Waldorf. Bookmark the permalink.