Jim’s presentation at the American Film Institute in Los Angeles was just a small part of his relationship with the organization. Read more about his connection with the AFI.

Numerous organizations celebrating screen media have showcased Jim and his work over the years. Jim was involved in the TV and film academies, attending events, presenting (and receiving!) awards, and helping with their education efforts. These connections continue into the present day. For Henson researchers, the Academy of Motion Picture Arts and Sciences maintains The Jim Henson Collection in their Los Angeles archives. This houses materials from all of his film work, including his Academy Award nominated short Time Piece. Learn more about the Academy Archives and the Henson collection. 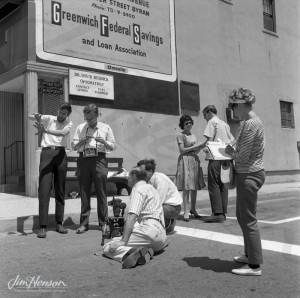 This entry was posted in 05-May '86, 1986, Appearances and tagged American Film Institute, Los Angeles, Time Piece. Bookmark the permalink.